A pie is a round, flat baked pastry, usually encased in pastry crust. It usually contains either a sweet or savory filling. Vegan pie recipes use solid vegetable-based fats instead of animal-based butter.
12 results - showing 1 - 12
Vegan Strawberry Rhubarb Pie 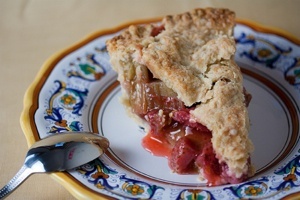 Strawberry and rhubarb's sweet and tart flavors are married with a hint of orange zest in this Vegan Strawberry Rhubarb Pie recipe. Strawberry and rhubarb together in a flaky pie crust is probably the most effective way to ring in the spring and summer months via flavor alone. Both of these fruits let go of lots of water during baking which can make things on the soupy side. A generous amount of arrowroot flour and a longer baking time at a slightly lower temperature than usual solves this issue and gives the pie a chance to bake to its juicy perfection. It's like a summer vacation in your mouth.
Read more
Vegan Apple Cheddar Galette 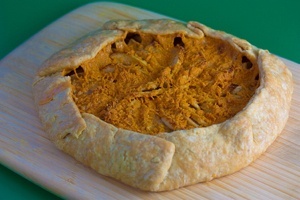 This Vegan Nectarine Peach Plum Cobbler recipe features the best members of the stone fruit family. They're having a little family reunion in your cobbler with special flavor enhancing guests like orange zest, orange juice, cinnamon, ginger and nutmeg. This cobbler party is then topped off with a lightly spiced crust.
Read more
Vegan Peanut Butter Chocolate Banana Pie

This Vegan Peanut Butter Chocolate Banana Pie recipe combines probably the three best flavor combinations in the entire dessert world. These three prominent flavors are then brought together in this vegan pie with brown rice syrup, non-dairy milk and a touch of salt. Use Flaky Pie Crust for best results.

I always thought properly made pumpkin pie was amazing until I tried sweet potato pie. Sweet potatoes are sweeter and the flavor is considerably more complex than pumpkin purée so that's why I was so excited to develop this Vegan Sweet Potato Pie recipe. This vegan pie is further enhanced with cashew butter, barley malt, cinnamon, ginger, nutmeg and cloves to create a flavor that will leave pumpkin in the dust. Try making it with Flaky Vegan Pie Crust.

Making your own vegan pie crust is time consuming but a homemade crust tastes about 23 times better than a store-bought one. You can make multiple batches and freeze the rest for later use. Home made pie crust has that irresistible flakiness and gives you the satisfaction of knowing that you made the whole pie. This Flaky Vegan Pie Crust recipe can be used for any pastry such as Vegan Pop Tarts, turnovers, English pasties or anything else you'd like to envelop in tender, flaky goodness.

In a pie crust the goal is tenderness and flakiness. This is achieved by a high level of fat and a low level of water. The fats serve two purposes: The Vegan Butter in this recipe breaks into small pieces, coating the flour and inhibiting gluten from forming. The shortening is cut into larger pieces so it doesn't break down as much when it's cut into the flour. This is so the shortening forms thin layers as the dough is rolled. These thin layers catch evaporating water as the crust bakes which causes the crust to form thin, flaky layers similar to what's found in puff pastry.
Read more
Vegan Pecan Pie 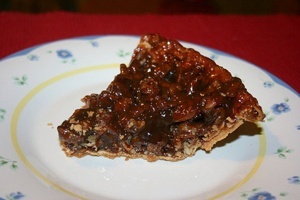 I thought I didn't like pecan pie until I had this Vegan Pecan Pie. The questionable brown mush experienced in normal pecan pies is replaced by barley malt, maple syrup and enhanced with cinnamon, ginger and a touch of cardamom in this version. Flaky Vegan Pie Crust is recommended.
Read more
Vegan American Apple Pie 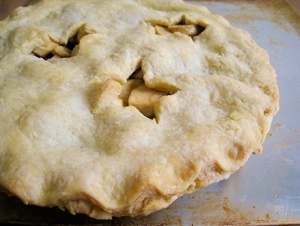 Read more
12 results - showing 1 - 12
On Veganbaking.net I show you the hows and whys of vegan baking. Thanks for reading! -Mattie