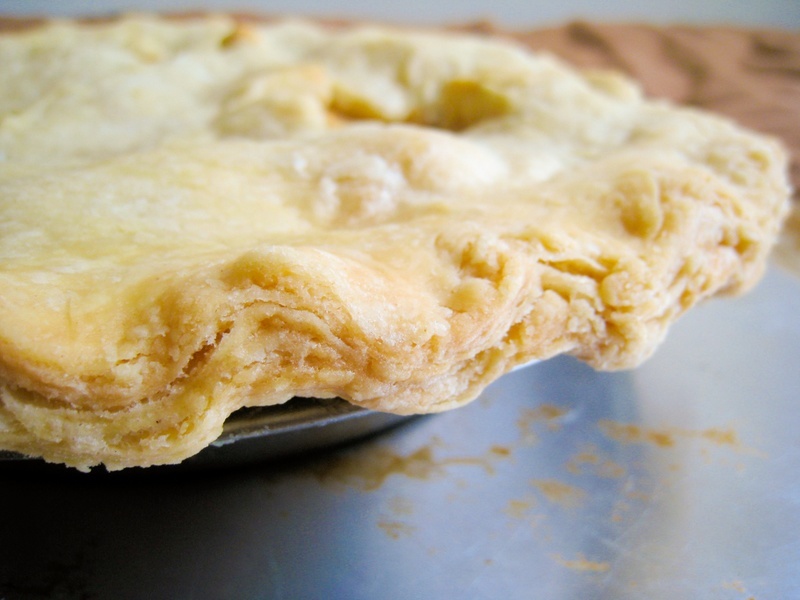 Making your own vegan pie crust is time consuming but a homemade crust tastes about 23 times better than a store-bought one. You can make multiple batches and freeze the rest for later use. Home made pie crust has that irresistible flakiness and gives you the satisfaction of knowing that you made the whole pie. This vegan Flaky Pie Crust recipe can be used for any pastry such as Vegan Pop Tarts, turnovers, English pasties or anything else you'd like to envelop in tender, flaky goodness.


The food science behind pie crusts

In a pie crust the goal is tenderness and flakiness. This is achieved by a high level of fat and a low level of water. The fats serve two purposes: The Vegan Butter in this recipe breaks into small pieces, coating the flour and inhibiting gluten from forming. The shortening is cut into larger pieces so it doesn't break down as much when it's cut into the flour. This is so the shortening forms thin layers as the dough is rolled. These thin layers catch evaporating water as the crust bakes which causes the crust to form thin, flaky layers similar to what's found in puff pastry.


Vodka in a pie crust?

This pie crust is adapted from Cook's Illustrated's famous vodka pie crust which takes crusts to the next level. The result is a dough that's easier to work with and more tender and flaky than traditional pie crusts. The vodka allows the dough to feel more moist so it's easier to roll, cut and form. The gluten in the flour doesn't bind in the presence of ethanol so the crust ends up being more tender. The alcohol cooks off so don't worry; your pie crust won't taste like alcohol but it will seem extra moist while you're working with it. This is by design. Don't worry about the quality of the vodka you use. 80 proof vodka is 60% water and 40% alcohol. Just remember: don't drink and roll. If you really aren't able to use vodka then change the water content of this recipe to 9 to 10 Tablespoons total.

Two pie crust recipes for the price of one

This pie crust recipe is broken into two versions: One for sweet pies and one for savory pies. The sweet version is designed to enhance fruity fillings by keeping itself in the background and allowing the filling to do the talking. The savory version kicks things up a notch by including slightly more salt and extra flavor enhancers so the crust is able to stand up to the savory punch of pot pie fillings, for example.

Psst! Shiitake mushrooms are one of the secrets of developing layers of savory flavor, which is a perfect way to crank up the intensity of savory pie crusts. Dried shiitake mushrooms are an additional secret-upon-a secret, because when these extremely savory mushrooms are dried, additional savory flavor enhancers get generated, called guanylates.  Dried shiitake mushroom powder is the perfect way to easily infuse serisous umami to anything without needing to add a water-based ingredient. To utilize this superpower of umami, I recommend first deodorizing your coffee grinder by grinding some white rice, corn meal, oatmeal or similar neutral-tasting grain. This will remove enough of the coffee flavor from your coffee grinder. Now place some dried shiitake mushrooms in your coffee grinder and let 'er rip until you have a fine powder. Save this powder for secret, behind-the-scenes flavor building. Don't tell anyone! Now add the proper amount in your savory pie crust.

As you did before, add a little bit of a neutral-tasting-grain to your coffee grinder and give it a whirl until you have a fine powder. Discard the powder, which will remove the savory mushroom flavors. No one will ever know- your secret is safe with me!

In a large mixing bowl whisk together the flour and salt. If you're using the pie crust for sweet pies, add the sugar. If you're using the pie crust for savory fillings, add the shiitake mushroom powder, onion powder, garlic powder and ground pepper. Using a fork or pastry blender, cut the Vegan Butter and shortening into the flour until the mixture resembles coarse sand. Take extra caution that you don't over mix. 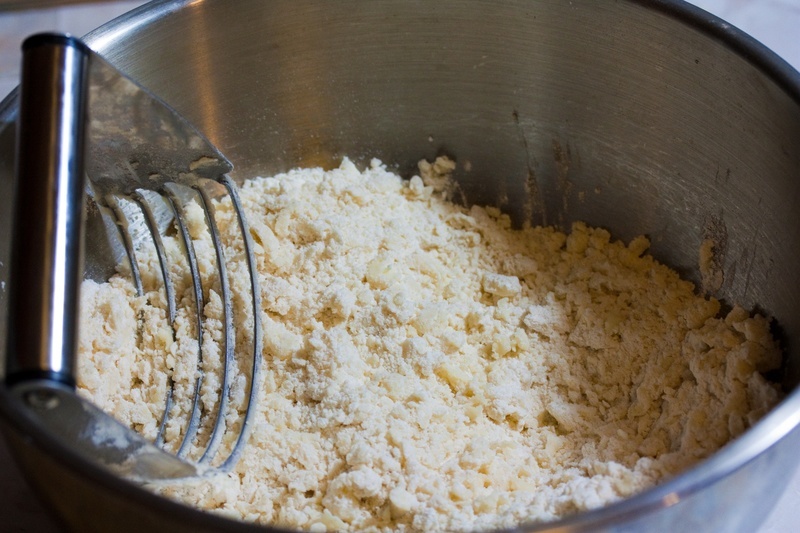 2) Carefully work the water into the dough

Drizzle half of the chilled water and vodka over the mixture then gently toss using your fingers. Drizzle the other half in and toss again. Now use the open palm of your hand to press down the dough to compress it. Break up the dough with your fingers and compress it again. Cut the dough in half inside the bowl with a spatula.


3) Chill the dough in the refrigerator

Wrap each piece of dough in plastic wrap, compress it to a 4 inch disc and chill in the refrigerator from 1 hour to 3 days. This dough can be kept in the freezer for up to 6 months for later use. This cold rest allows the dough to absorb the water, which will yield a softer, more elastic dough that is less likely to break and crumble.

If you're working in extremely hot weather conditions, don't be afraid to put things in the freezer for a few minutes while you're working. The goal is to have a cool crust go into a hot oven so the crust pops from the pockets of fat and water. This is what makes a flaky crust.


4) Roll out the vegan pie crust

Now go around the perimeter and tuck and fold the outer edge under the crust so that it's uniform with the edge of the pie plate. Flute the dough with your fingers or press the edges down with the end of a fork to shape.

This assumes your filling is already in the bottom crust of a non-pre baked pie crust. Roll your other disc of pie dough as directed in Step 4. Using a pastry cutter or a pair of scissors, cut the top crust so it's the same diameter as the outer diameter of the pie crust shell. Fill a small bowl with water and use a culinary brush or your finger to coat the outside top diameter of the pie crust shell. Now take your rolled out pie crust top and remove the parchment paper on the top. Carefully flip it over the top of the pie. Once it's centered, remove the other piece of parchment paper and use scissors to cut the excess off of the pie crust top so it matches the pie crust bottom. Now go around the perimeter and tuck and fold the outer edge under the crust so that it's uniform with the edge of the pie plate. Flute the dough with your fingers or press the edges down with the end of a fork to shape.

Some pie recipes that don't require the pie to be baked for very long will require it to be pre-baked, also known as blind-baked. To do this, first preheat your oven to 425F (218C). Go around the perimeter of your pie crust and tuck and fold the outer edge under the crust so that it's uniform with the edge of the pie plate. Flute the dough with your fingers or press the edges down with the end of a fork to shape. Place your pie crust in the refrigerator for 1 to 24 hours. This will allow the gluten to relax so it doesn't pull together as much during baking. 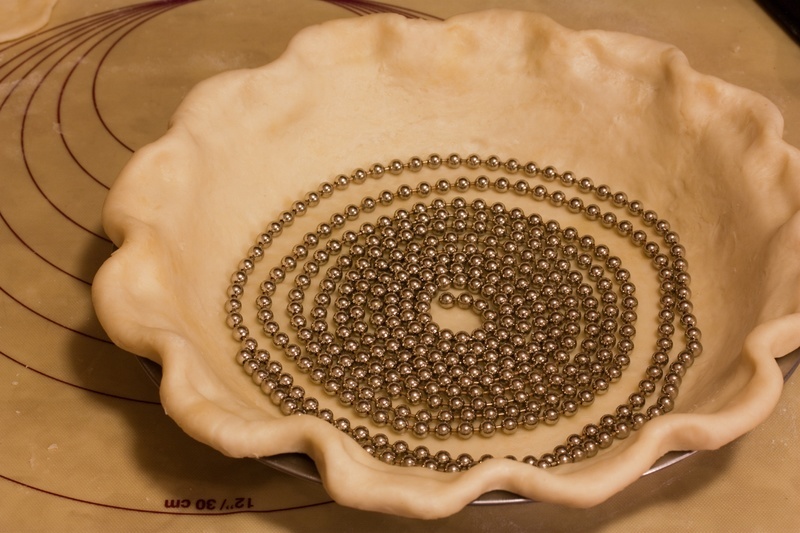 Place the pie on a cookie sheet that is on the oven's lowest rack. The cookie sheet will draw extra heat to the pie crust's bottom, allowing it to bake at the same rate as the upper parts of the crust. Bake it for 15 minutes, then remove the foil and pie weights. Rotate the pie 180 degrees and bake it for another 5 to 10 minutes until the crust is golden.

This recipe makes one 9 inch Flaky Vegan Pie Crust shell with one crust top which is known as a double crust. You can also use this recipe to make two pie shells.