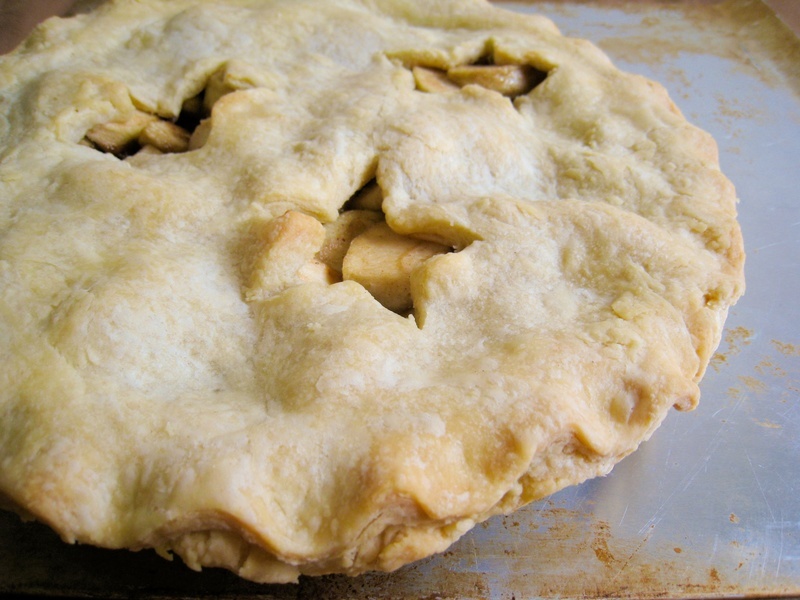 Preheat your oven to 425F (218C). Place an over rack on the lowest setting and place a rimmed baking sheet on it. Peel, core, and thinly slice your apples and place them in a large bowl. Set aside.


2) Whisk together your flavor building ingredients

In a medium mixing bowl whisk together the sugar, Vegan Butter, arrowroot powder, Calvados if using, molasses, cinnamon, nutmeg and allspice until well incorporated. Add this mixture to the bowl containing the sliced apples and mix until the apples are evenly coated. Arrange the apple slices in concentric layers in the pie crust so they're packed as compact as possible. Makes 1 Vegan American Apple Pie.

If you're using a store bought crust

Usually store bought crusts come with two crusts. Take the extra pie crust shell and crumble it into small pieces. Place it in a food processor and pulse a few times until the consistency is of cumbs resembling gravel. If you don't have a food processor, place the crust pieces in a large bowl and break into large crumbs with your bare hands.  When topping the filling, sprinkle these crumbs in top of the pie until it's well covered.


If you're using a homemade pie crust

Roll out your top pie dough until it's about an inch larger than the outside diameter of your pie dish. Using a paring knife, cut a few designs out of this crust. Stars or leaf shapes work well for this. Fill a small bowl with water and use a culinary brush or your finger to coat the outside top diameter of the pie crust shell that your apples are in. Now take your rolled out pie crust top and using a large spatula to help you, pick it up and transfer it over to the top of your pie. Once it's centered onto the top of your pie, use scissors to cut the excess off of the pie crust top so it matches the pie crust bottom. Go around the pie and horizontally crimp the outside diameter of the top crust with the bottom crust together with your fingers.

Place the pie on the baking sheet in the oven and bake for about 15 minutes. Lower heat to 375F (191C) and bake until the crust is golden brown, about 30 minutes. To store, cover the pie with plastic wrap and keep it in the refrigerator for up to 1 week. This recipe makes one 9 inch Vegan American Apple Pie.

Vegan Nectarine Peach Plum Cobbler
Category: Vegan Pie Recipes
On Veganbaking.net I show you the hows and whys of vegan baking. Thanks for reading! -Mattie