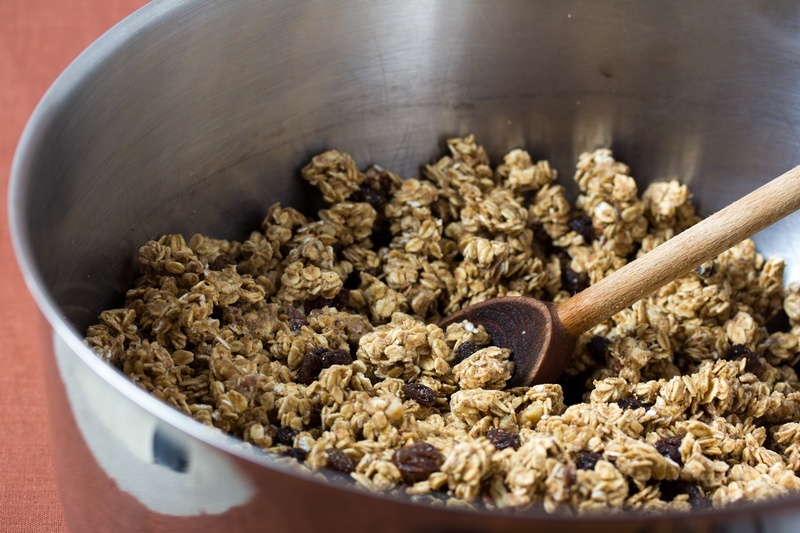 Making this Easy Vegan Granola recipe is only slightly harder and much more fun than scooping it out of the bulk bins at the local health food store. It features almond butter for its base, rolled oats, cinnamon and nutmeg and just the right amount of walnuts and pecans to round out the crunch. A touch of raisins add a welcoming sweetness.

I prefer to not overload with sugar in the morning so my granola recipes tend to err on the side of reduced sweetness which is a contrast from most store-bought granola. If you like your granola sweet then you may consider adding a few Tablespoons additional sugar. The reduced sweetness allows other flavor nuances to come through. The almond butter toasts during baking which brings on a rich flavor. A small amount of unrefined coconut oil increases flavor complexity further. Use this granola recipe as a base for future granola recipes. Enjoy it with non-dairy milk, top it with non-dairy yogurt or crumble it over ice cream.

2) Combine the ingredients to make your vegan granola

In a large mixing bowl, stir together the oats, wheat germ, walnuts and pecans. Add the wet ingredients from Step 1 and thoroughly stir until well combined.

Place the mixture on a baking sheet and spread it out flat. Bake for 30 minutes, or until the granola starts to dry. If using two baking sheets, switch racks halfway during the baking duration. Remove from the oven and let cool.

Transfer the granola to a large mixing bowl and break it up into smaller pieces. Stir in the raisins or other dried fruit. Store in a covered container at room temperature for up to 2 months. This recipe makes about 8 cups of Easy Vegan Granola. 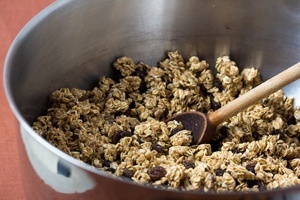 Vegan Tropical Paradise Granola
Category: Vegan Granola Recipes
On Veganbaking.net I show you the hows and whys of vegan baking. Thanks for reading! -Mattie