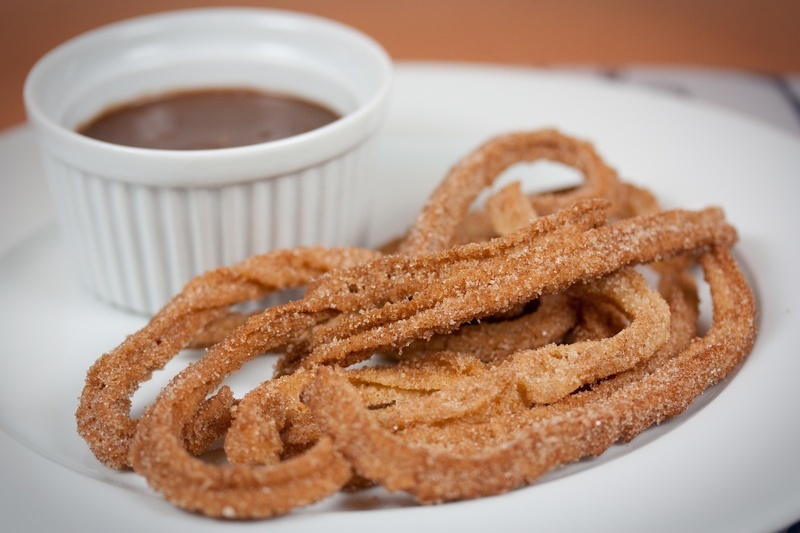 Churros are so good and such a rare treat that it's always a sign of good luck to actually find them. Traditionally they're made with eggs so vegan churros are an even more rare find. This Vegan Churro recipe features sugar and cinnamon for churriffic flavor and flax as the primary binder. It's important to use the biggest pastry bag star tip you can find and to go easy on the frying until they're just barely golden brown so they're not too crisp. A candy thermometer is crucial for best results. Enjoy these churros with Churro Chocolate Sauce that's enhanced with the creaminess of non-dairy milk and just a pinch of cayenne.


For the Chocolate Sauce

In a small bowl, whisk together the flax meal and the water. Let sit for about 10 minutes so the mixture thickens.

In medium saucepan whisk together the water, Vegan Butter, brown sugar, salt and bring to a boil. Turn the heat to low and stir in the flour until it turns into a ball of dough. Remove from heat.


4) Mix the flax mixture and vanilla extract into the roux

Add the flax meal water mixture and the vanilla extract to the medium sauce pan and stir with a wooden spoon until it incorporates itself into the ball of dough.


5) Pipe the vegan churro dough into the hot oil

Fill a pastry bag with the churro dough and attach the largest star tip that you have. Make sure the temperature of the oil has stabilized at 360F (182C) and you no longer have to adjust the heat as often.

Squeeze a five inch long piece of dough out into the hot oil. You can use your finger to release the dough from the star tip. Squeeze out about 4 pieces of dough at a time, being careful not to burn yourself on the hot oil. Cook them about 1 minute, turn them over, then cook an additional minute or until barely golden brown. It's important to use the biggest star tip you can find and to cook them until they're barely golden brown. The smaller diameter they are and the darker they get, the crispier they get.

Remove the churros with a slotted spoon or carefully with tongs and place them on a plate covered with a few paper towels so the excess oil can drain off.


6) Coat each churro in the cinnamon sugar

Roll each churro into the bowl with the sugar and cinnamon until well coated. Enjoy them dunked in Churro Chocolate Sauce below.


7) Prepare the Chocolate Sauce by melting the chocolate


8) Whisk the rest of the ingredients into the chocolate mixture

In a medium mixing bowl, whisk together the other cup of non-dairy milk with the sugar, arrowroot flour or tapioca flour and cayenne powder. Add this mixture to the chocolate mixture from Step 1. Place on low heat, whisking constantly for about 5 minutes or until the chocolate is thickened. Pour and serve in small bowls or ramekins for dunking the churros. The churros should be served warm and dunked into the chocolate sauce for every bite.

Get a price on the Pastry Bag I Recommend at Amazon.