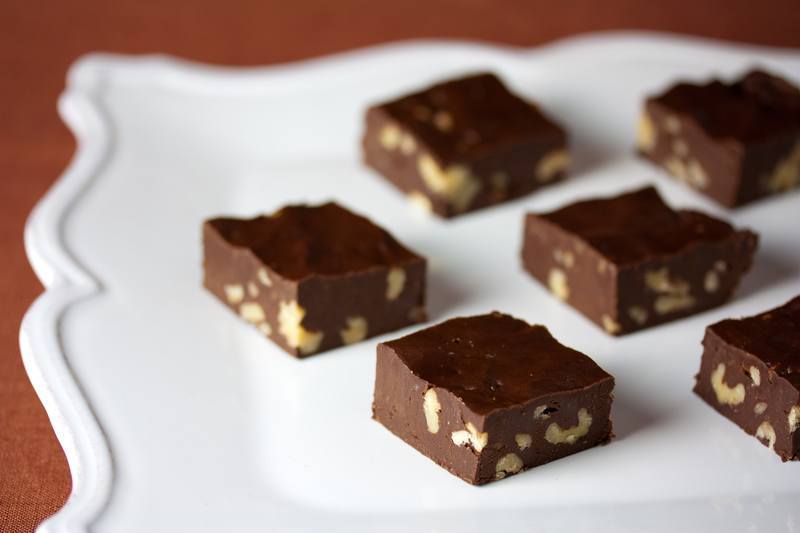 When working on this Vegan Double Chocolate Fudge recipe I learned that in order to master fudge, you need to thoroughly understand caramelization. Luckily, after dozens of fudgy failures, I now understand caramelization well enough to the point of where I can proudly share my recipe for all to enjoy, because you, dear reader, are worth more than marshmallow fluff. This recipe is easy as long as you follow it closely.

Traditionally, fudge is made with a caramel base that lends a delightful chew and contributes extremely rich flavors. This is because when sugar is caramelized, hundreds of flavor compounds are created. One day someone got lazy and decided that making caramel was too much drama and they turned to marshmallow fluff to take its place. This is the new school way of fudge making. Marshmallow fluff is sticky so it contributes to the chew of fudge but it severely lacks caramel's rich flavors. The result is a fudge that is slightly easier to make but flat on flavor. I'll take the old school approach thank you very much.

Learn about the sugar caramelization stages.
You'll need a heavy-duty saucepan and a candy thermometer to make this vegan fudge recipe but it's worth it. It features two different types of chocolate and a touch of espresso powder for maximum chocolate flavor. You can also add things like Kahlua, Grand Marnier, bourbon, espresso, mint extract, etc to satisfy your chocolate craving in your own special way.

1) Refrigerate the coconut milk and toast the nuts

Place two 13.5 fluid ounce (400ml) cans of full fat coconut milk in the refrigerator for a minimum of 4 hours. It's important to use full fat coconut milk instead of lite coconut milk in order to yield enough coconut cream for this recipe to work properly. Line an 8 x 8 inch square baking dish with parchment paper and set aside. Toast ¾ cup chopped pecans or walnuts if using, by placing them on a baking sheet and baking at 300F (149C) for 20 minutes. Chop the chocolate pieces into ¼ inch pieces. This is very important because if the pieces are larger than ¼ inch they won't melt enough. Place the chocolate pieces in a large mixing bowl, sift in the cocoa powder, espresso powder and set aside.

3) Prepare the caramelize the sugar mixture

This is where we caramelize sugar into a syrupy caramel. In a heavy-duty 2 ½ quart saucepan, add the 1 cup coconut cream from Step 2, sugar, agave syrup and salt. Mix them together with your fingers being careful to have as little sugar as possible on the sides of the saucepan. Any stray particles in our mixture during the caramelization process will attract sugar crystals which are undesirable. The agave syrup or corn syrup is critical in this recipe because they both inhibit sugar crystallization which ensures our fudge remains soft and chewy.

4) Caramelize the sugar mixture to perfection

Place the saucepan over high heat with its cover until the mixture boils. Remove the cover and reduce to medium heat. Initially, the mixture may want to boil over and the heat will have to be adjusted as the mixture reduces. Keep the heat high enough so that the temperature rises but low enough so you don't burn it. Resist the temptation to crank the heat up unless the temperature stops rising. If you see smoke puffs then you're burning the bottom and the heat should be reduced. It should take around 20 minutes for the mixture to register 250F (121C) with a candy thermometer. Remove from heat and slowly pour the mixture into another large metal mixing bowl placed over a wooden cutting board to insulate it from your work surface. Be extra careful to not scrape the bottom of the saucepan with a spoon or saucepan while pouring. Doing so will scrape bitter burned sugar pieces into your precious caramel.

Whisk the ¼ cup coconut cream you saved from Step 2, vanilla extract and up to 2 Tablespoons other flavoring liquids into the caramel mixture. When the mixture cools to around 210F (99C), transfer it to the bowl containing the chocolate and mix with an electric mixer on high until smooth. Stir in the walnuts or pecans if desired.

6) Press the fudge into the baking dish and cool

Transfer the mixture into the baking dish. With dampened hands, push the fudge into place then transfer the to the refrigerator to cool for a minimum of two hours.

7) Remove the vegan fudge and cut into squares

Lift the fudge out of the baking dish by its parchment paper liner and place it on a cutting board. Slice into squares with a large knife. Store in an airtight container in a cool dark place for up to one week or in the freezer for up to six months. This recipe makes one 8 x 8 inch tray of Vegan Double Chocolate Fudge.

Get a price on the Organic, Fair Trade Certified Cocoa Powder I Recommend at Amazon.